Our portfolio company, Apogee, launched the newest product, Turbo Overkill. It climaxed to a high point in PAX East, and gained 96% good reviews as a new Steam game. Here is the recommending review from PCgamer. 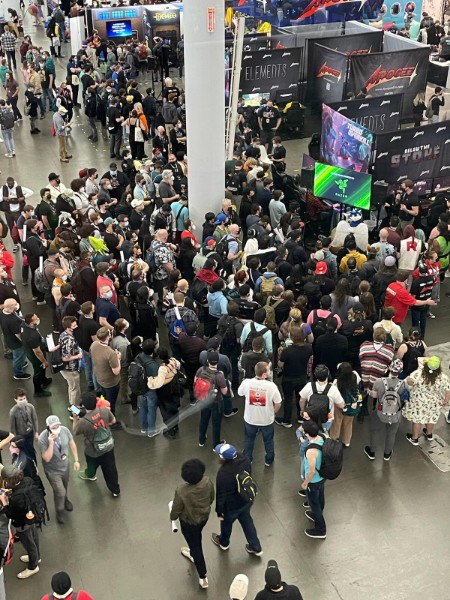 The super-fast retro shooter releases on Steam in Early Access this Friday.

In 1987, The Evil Dead 2 introduced the chainsaw arm. Now, 35 years later—almost my whole lifetime—the chainsaw leg is finally here, and I’m happy to say that it was worth the wait.

I didn’t know that one of my legs was a chainsaw in Turbo Overkill until I reached the leg chainsaw tutorial, so it came as a delightful surprise. You use it by sliding toward enemies on the ground, chainsaw leg outstretched, like a baseball player sliding into a base. Except, imagine that these baseball players can somehow slide all the way from one base to the next. That’s the range on the slide. The ability is introduced in an indoor skate park so you can practice hitting inclines for speed, and that was the moment I knew I’d be into Turbo Overkill—about two minutes into the game.

Turbo Overkill releases on Steam Early Access this Friday. It comes from New Zealand outfit Trigger Happy Interactive, which was formed in part by Sam Prebble, creator of notable Doom 2 mod Total Chaos. If you have an interest in the wave of ’90s revival shooters that have been lovingly dubbed “boomer shooters,” you’ll recognize Prebble’s crowd. Turbo Overkill getting a friendly shout out from Dusk and Amid Evil publisher New Blood Interactive was a given.

But where Dusk and Amid Evil recall the demons and magic of Doom, Hexen, and Blood, Turbo Overkill is more Duke Nukem, Quake, and System Shock. Its premise sounds like it was devised by a ’90s megachurch, if ’90s megachurches made first-person shooters: As Johnny Turbo, you enter the city of Paradise to free it from Syn, a sentient AI whose minions have overrun the cyber metropolis.

Retro shooters have been pairing low-res textures with modern lighting tech to great effect, and you can bet it’s raining when you arrive in Paradise, the wetted concrete ground reflecting the overhead lights. It gets dark and grimy to the point of ugliness at times, but the splashes of color look great when they show up—I love the holographic palm trees.

It’s just the kind of setup you’d expect from publisher Apogee, which released many of the classic FPSes the recent throwbacks are inspired by, including Duke Nukem and Wolfenstein 3D. The company was relaunched last year by its original founders and has gone right back to where it started with Turbo Overkill, which it says is the first FPS published by Apogee in 25 years. (A point of clarification: Apogee and 3D Realms were originally one and the same, but the 3D Realms label changed owners a couple times, and is currently held by Embracer Group. Apogee founder Scott Miller considers his reformation of Apogee to be its true continuation.)

Like other throwback shooters, Turbo Overkill is unreasonably fast, and blowing Syn’s minions into bloody chunks while figure skating around them with a sawed-off shotgun feels just about perfect, if Quake is your idea of a good time. What I’m most excited about are the special abilities. I can’t get enough of the chainsaw leg, but there’s also wallrunning, a grappling hook that I haven’t unlocked yet, “hero time,” which I assume is a non-copyrighted version of bullet time from Max Payne (another game originally published by Apogee), and other augments to be unlocked. Without a precession of new toys or spectacles, I tend to lose interest in these retro shooters, even if they do the basics I enjoyed as a teenager admirably. I’m down for whatever weird abilities or weapons Turbo Overkill throws at me.

After three levels, my gripes are mainly with the levels themselves. For a game that encourages me to luge everywhere on my chainsaw leg, there are surprisingly few downhill slopes in the early going. Instead, I’ve been climbing up towers with the help of anti-gravity beams, and then getting too reckless with the slide maneuver and falling back to the bottom of the level. It’s all videogame architecture, too: nonsensical arrangements of rooms and hallways and platforms that are easy to get lost in after falling or circle strafing too many times.

That is sort of the classic FPS experience, though I hope that future parts of Turbo Overkill simplify the geometry a bit so I can let loose with its movement abilities. I’ll forgive it for making me collect color-coded keys, too, because it’s hard to fault a ’90s throwback for including elements of ’90s game design, but if I’m being honest, wandering around textured block mazes looking for keys hasn’t excited me much since Quake 2. I just want to be funneled in a direction, mostly, which I know is very modern and boorish of me.

Turbo Overkill keeps it fun by loading me up with abilities, though. I enjoy the occasions when I zoom through a line of enemies, off the edge of the platform, momentarily hang in the air like a Looney Tunes character, and then scramble back to safety using the double jump and air dash, which are part of Johnny Turbo’s skillset from the start. And that non-linear, key-centric level design does create lots of possibilities for the extreme optimization enjoyed by speedrunners.

In its Early Access form, Turbo Overkill includes the first chapter’s eight levels, plus eight “secret unlockable levels.” Two more chapters are planned for the full game, which the current plan has releasing early next year. It’ll be out Friday on Steam.